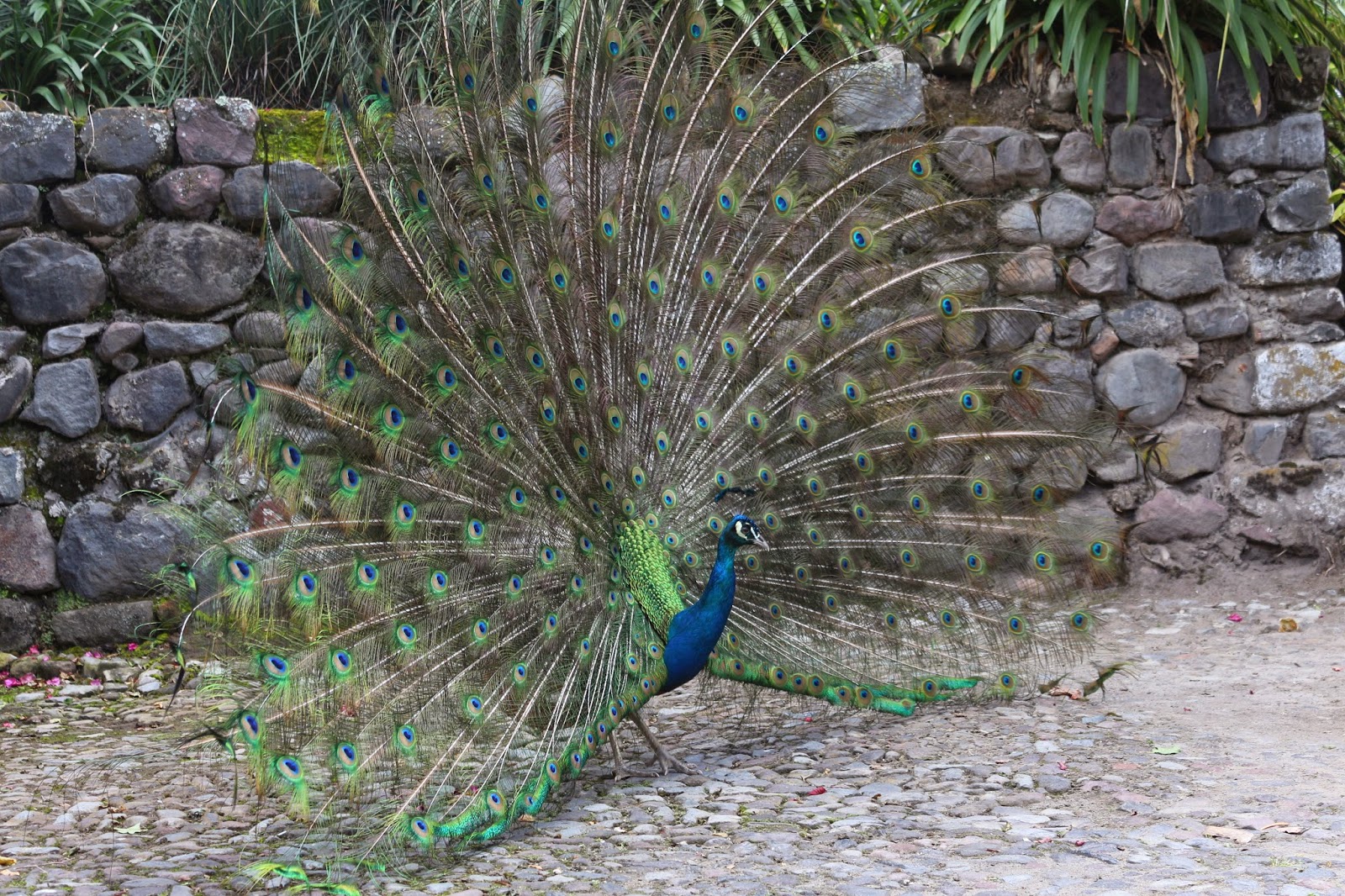 I've been back from Ecuador for more than a month now, but every time that I see my pictures that I snapped with both my iPhone and DSLR camera I am filled with joy and awe. This was truly an adventure of a lifetime, and I still cannot believe I really went to Ecuador and saw everything that I did. It almost seems like a total dream now.

My second day in the highlands was a very relaxing one. We started off with a little painting activity and Kevin [ peacock ] watching  in our hacienda (No pictures from the painting because it was too darn cold at 8:00 am in the Andes!). After a short bus trip up the mountain, we came to a plateau where the wind streams in the Andes mountains were absolutely perfect for flying kites. 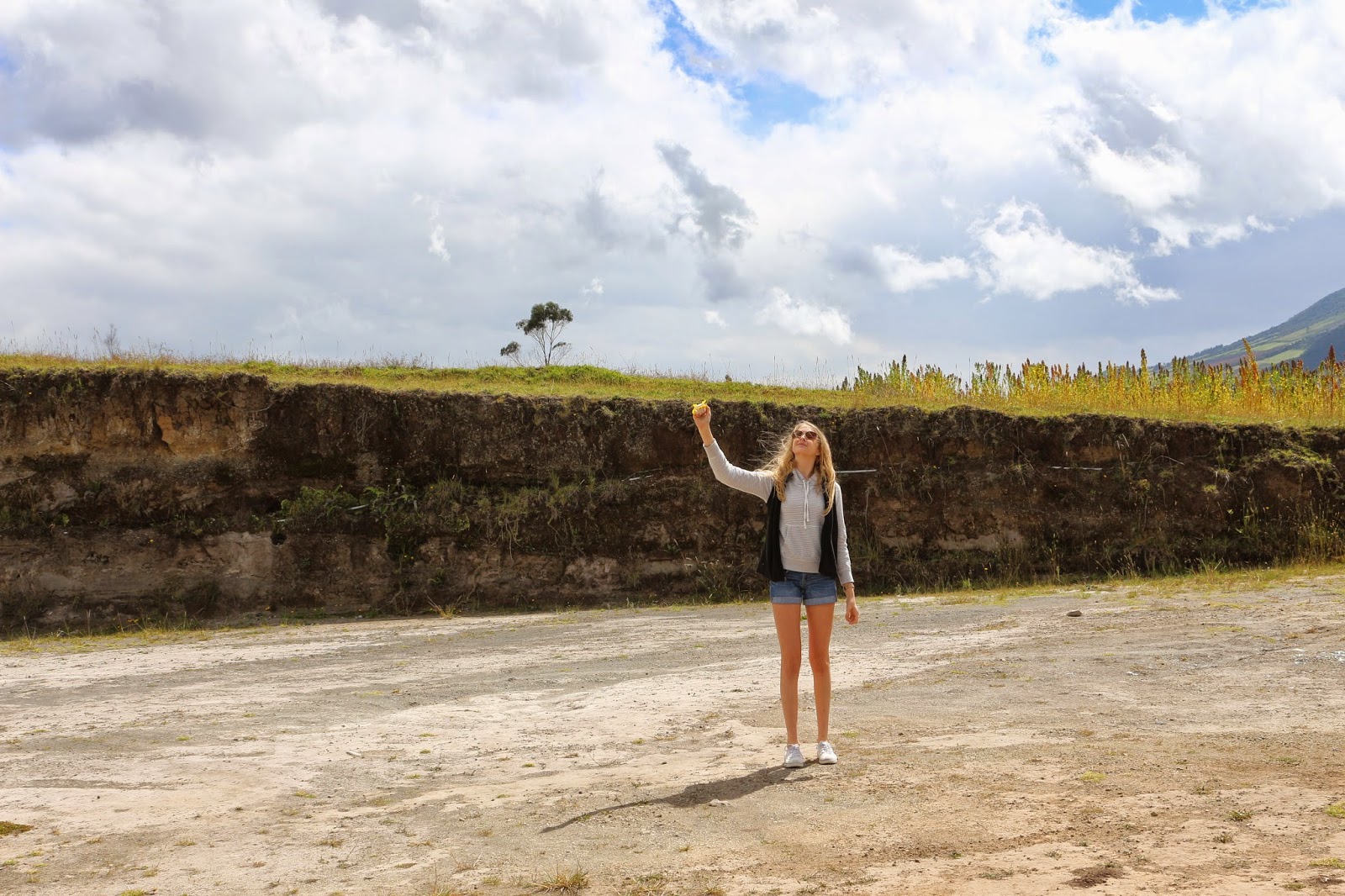 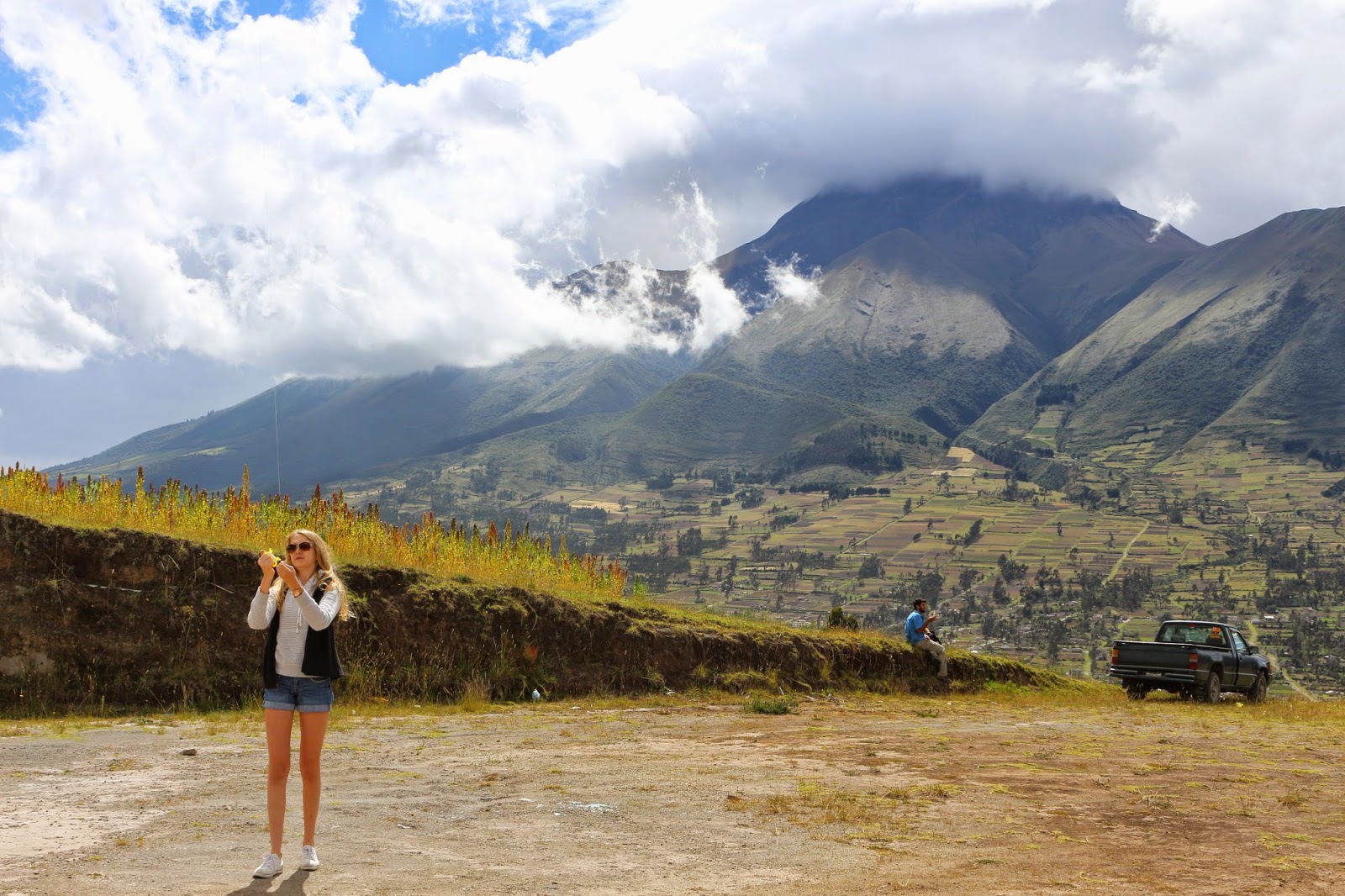 I haven't flown a kite in at least ten years, so naturally I was a little bit rusty. After I caught the perfect gust of wind my kite went soaring up into the air, at least 50 feet up!! Yeah, I felt pretty damn accomplished. Do you see that wall behind me? Don't let it fool you, it is at least three times my hight at the highest point to the left and about to my waist on the lowest point on my right. But if you climbed up that wall and came to the grassy field above it, you had the most beautiful view of the entire valley we were overlooking and if you turned away from the mountain all you saw were fields of quinoa for miles and miles. 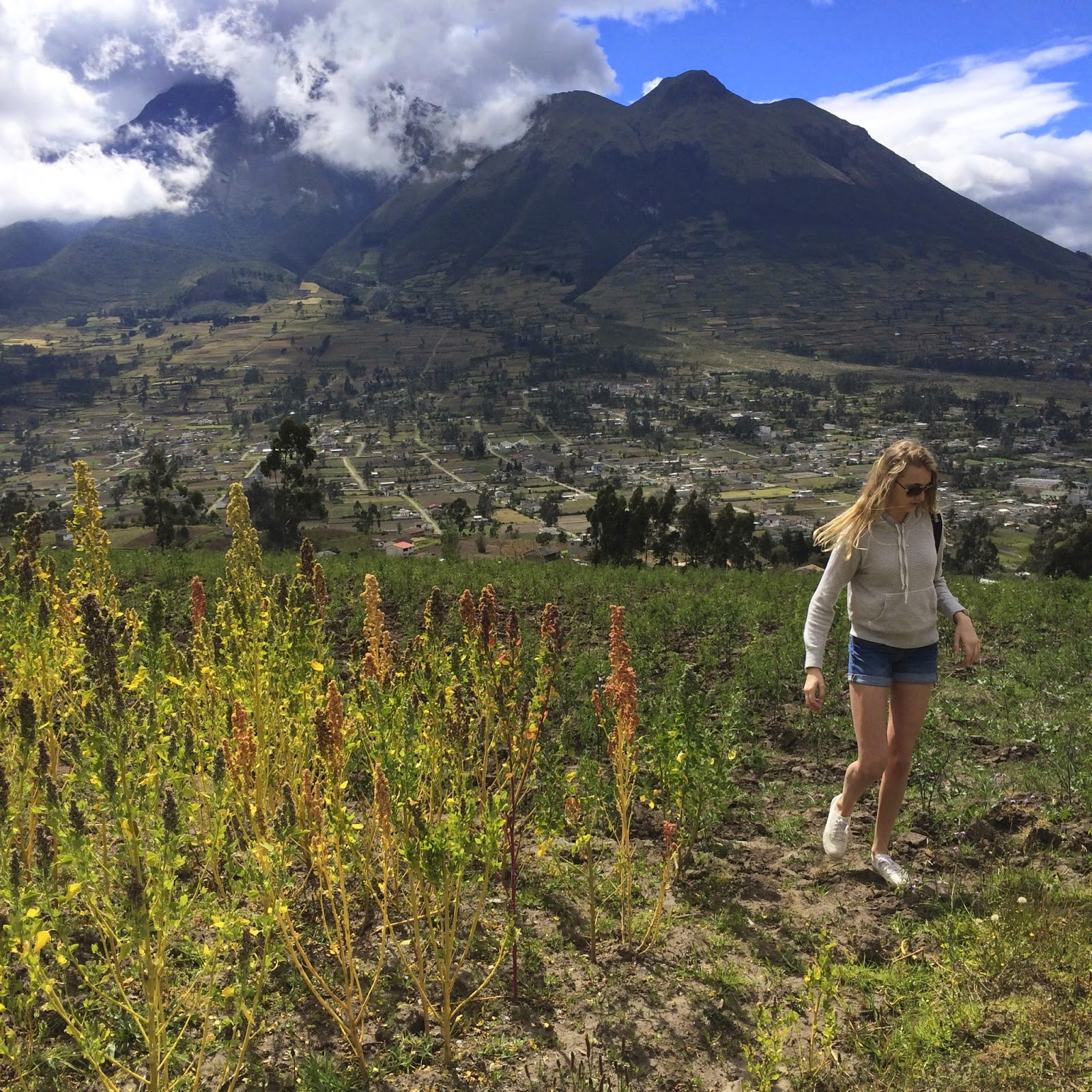 The mountain behind me was just so majestic. All around the valley there were nothing but clear skies. However, at the summit of the mountain, it created its own weather systems. I loved watching the clouds swirl around the peaks. And every so often, if you were patient and you glanced at the mountain at the right time, you could get a peek of the summit before the clouds covered it again. 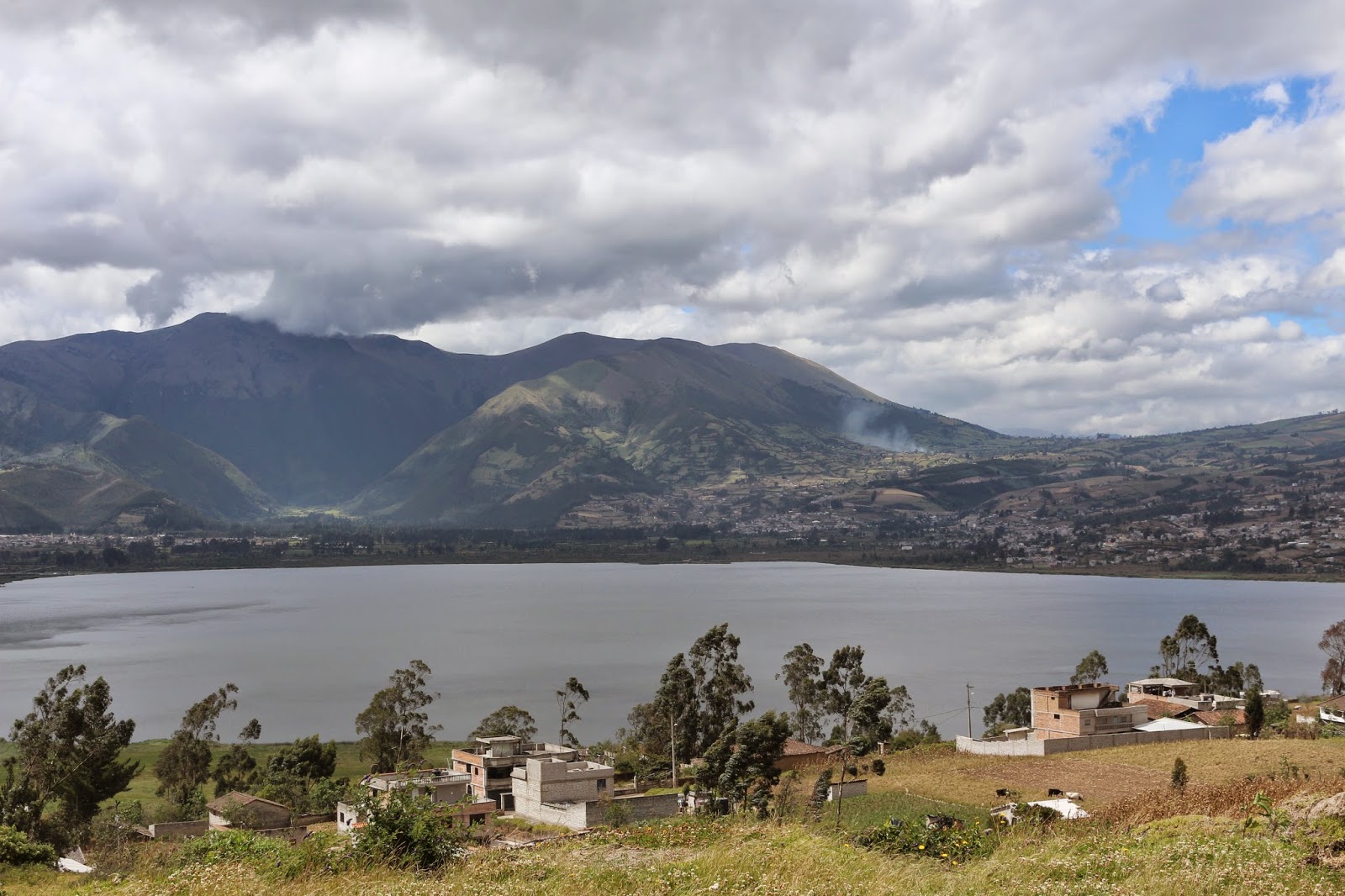 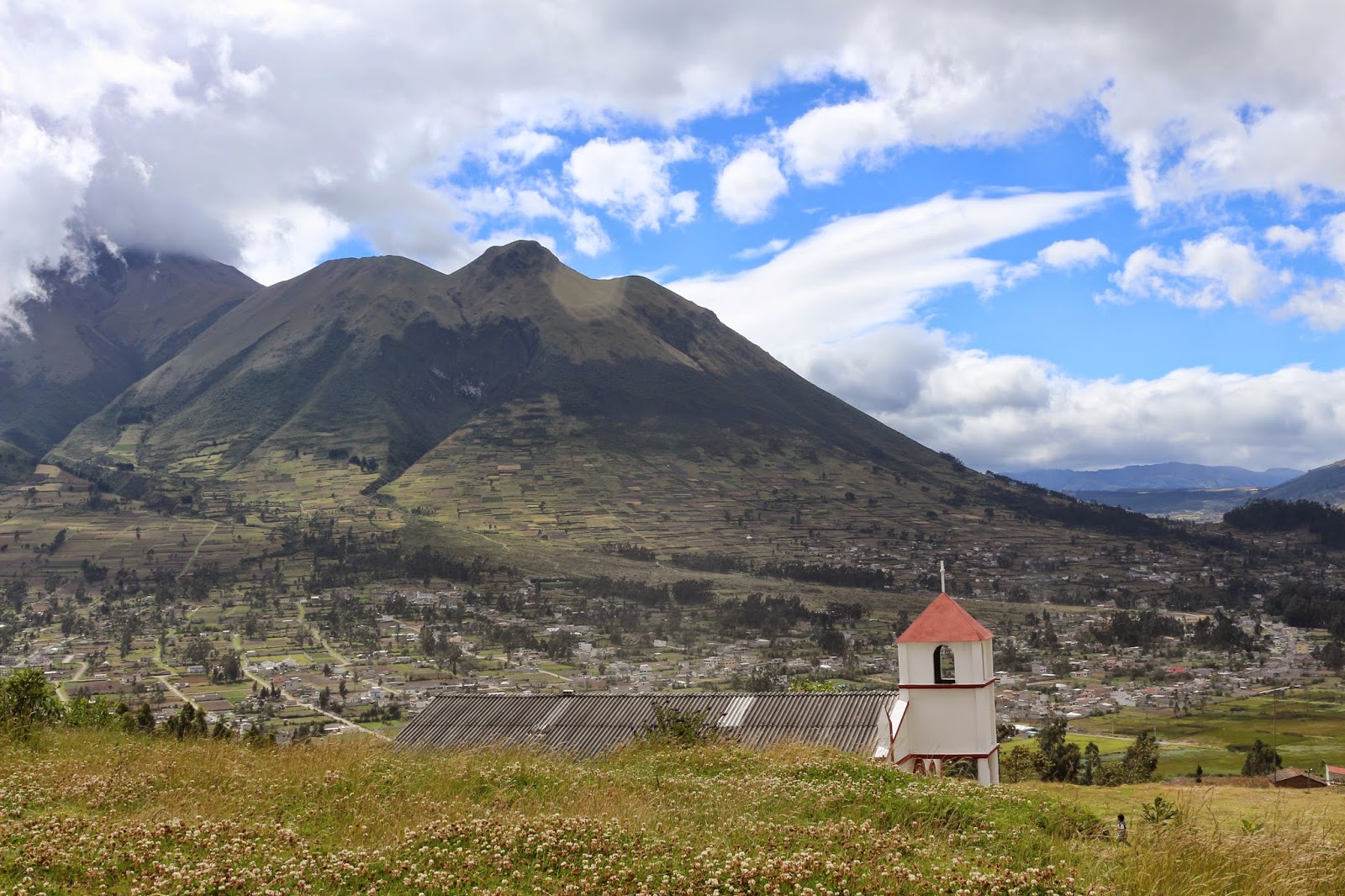 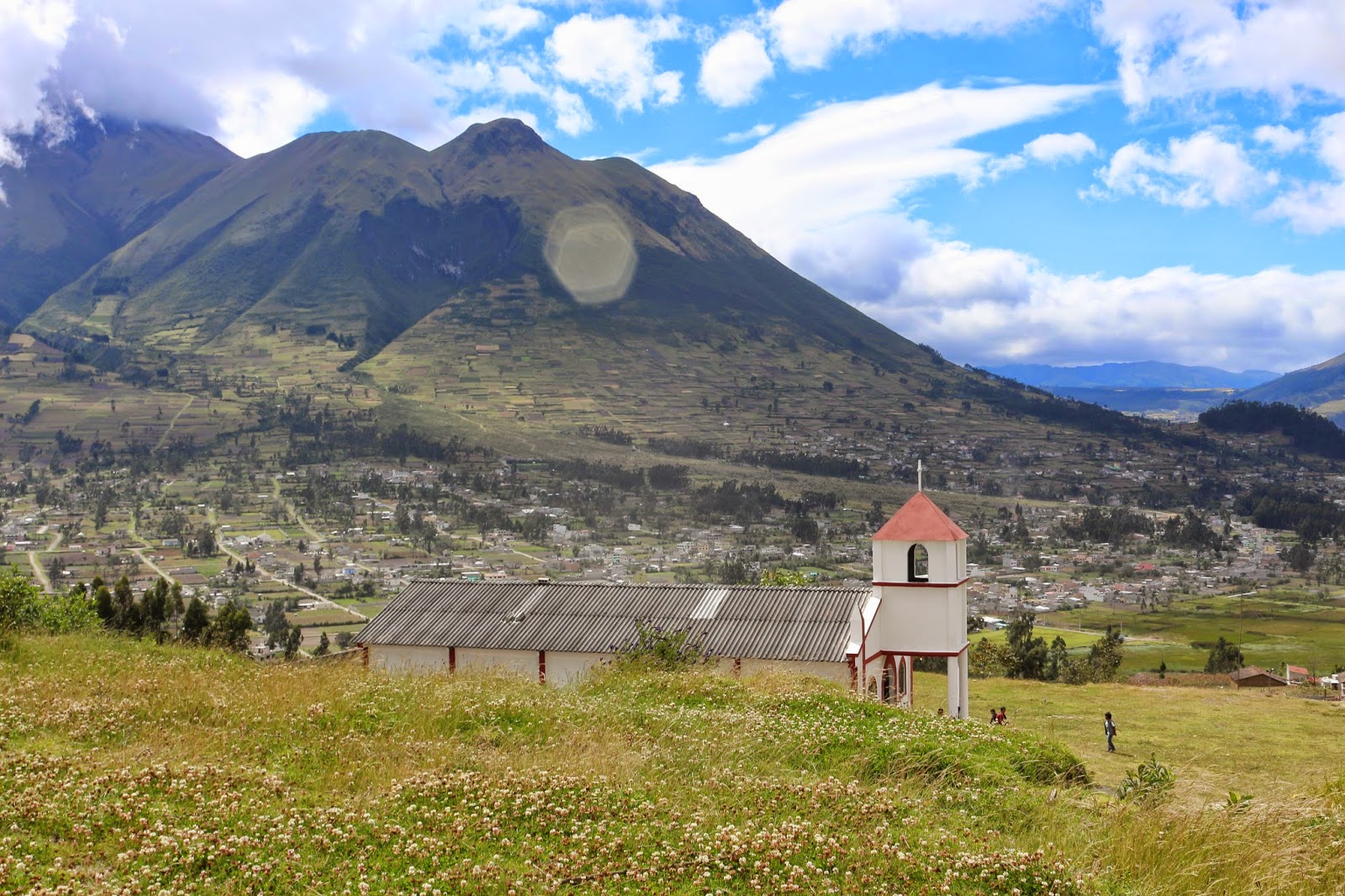 The Ecuadorians practice the Catholic faith primarily, and we visited this part of Ecuador on a Sunday. So naturally when a local sees a big group of Americans flying kites, they are bound to be quite curious. So after this adorable church finished their mass, about a dozen Ecuadorian children climbed a hill to reach the plateau where the kites were being flown. Some of them were dressed in sweatshirts from the Gap and Jeans, others were dressed in their traditional Ecuadorian attire. This little girl was so adorable wearing her Ecuadorian dress and with the braid cascading down her back and some hair pieces blowing in the Andean wind, you could tell that she was so excited to explore what the Americans were up to. As she was climbing the small hill, I pointed at my camera asking if I could take her picture, she stood up proudly and put the biggest smile on her face. 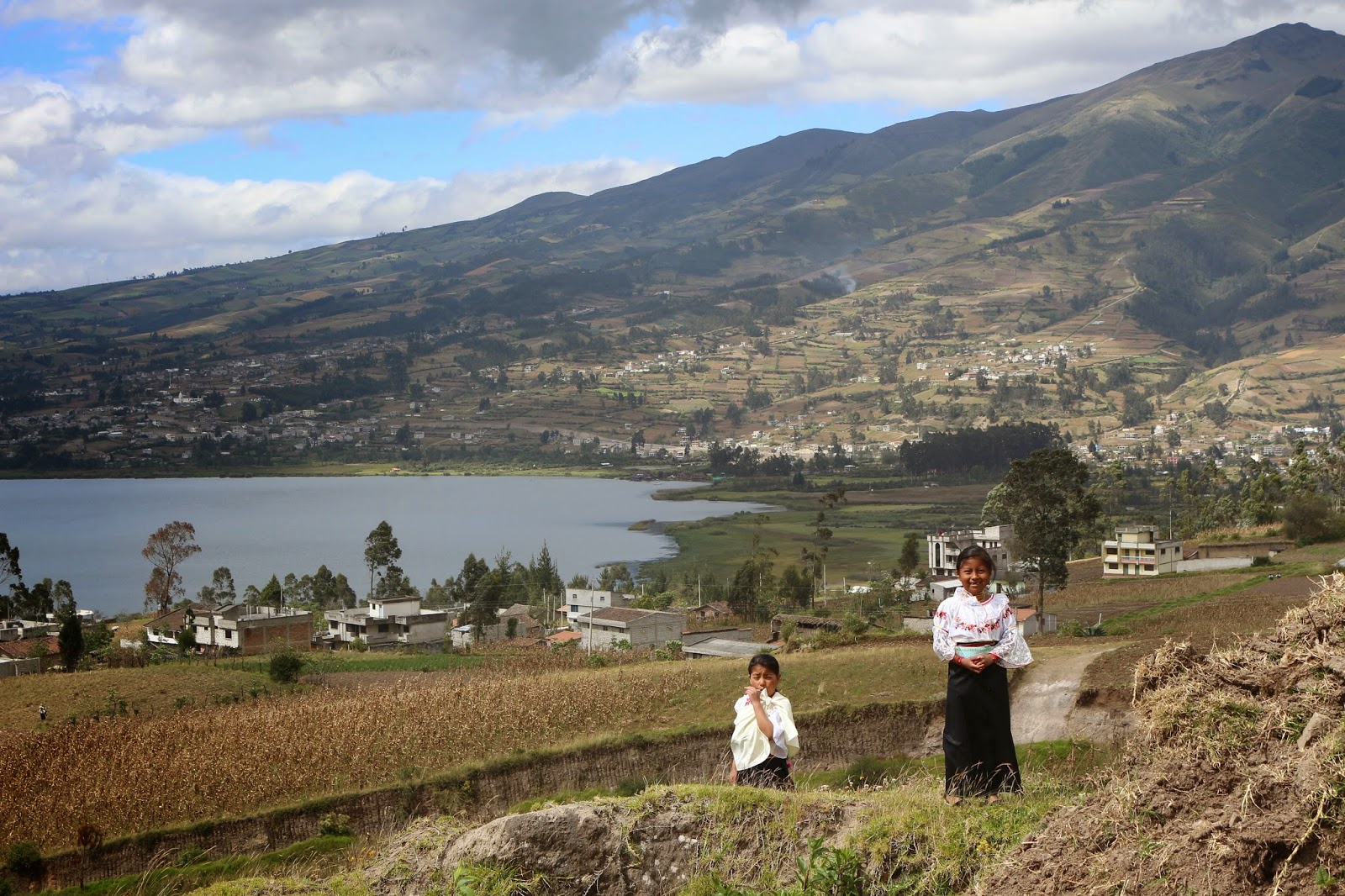 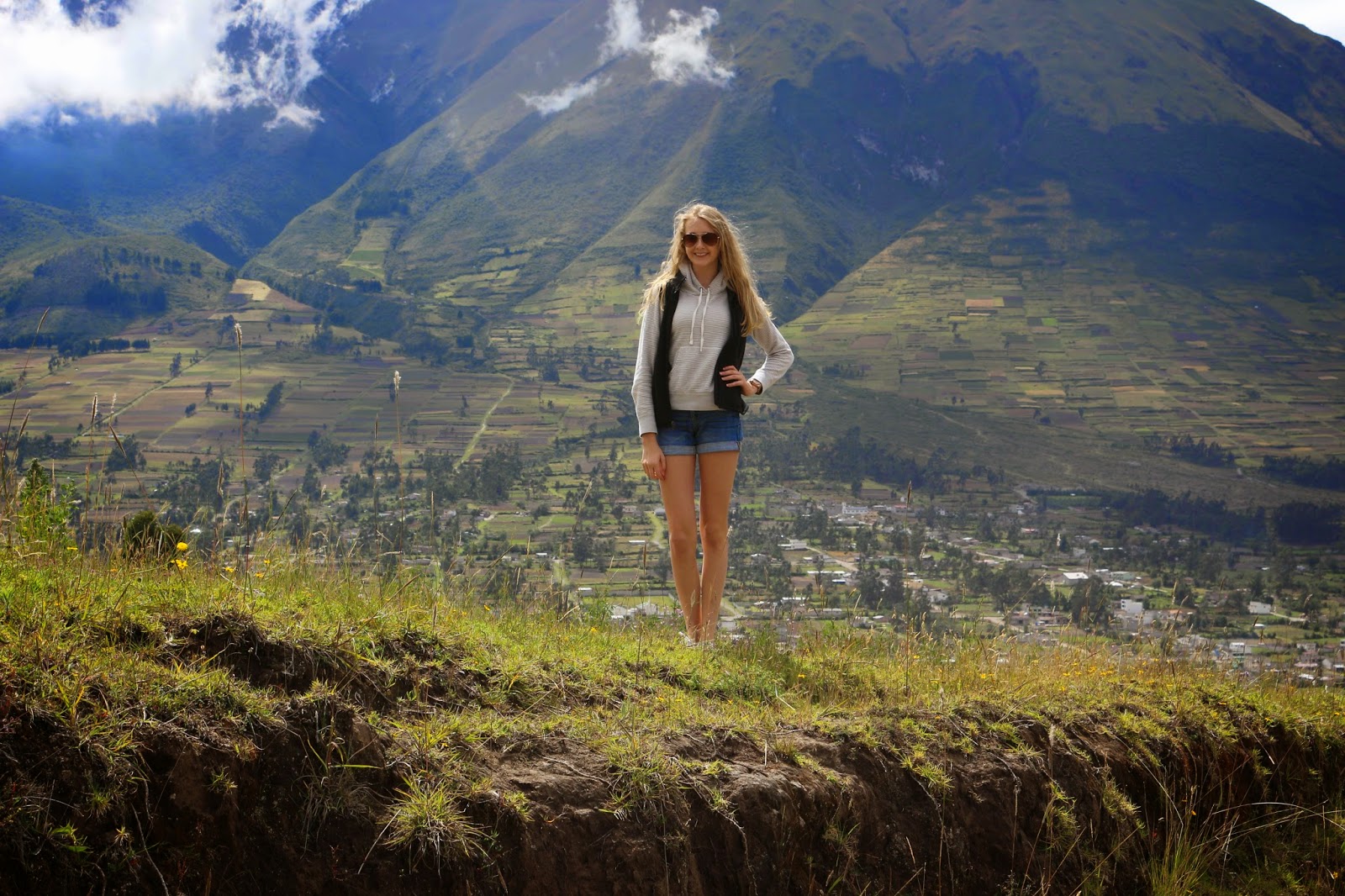 Another aspect of Ecuadorian life was the fact that they can grow anything anywhere. On top of the mountain, the air is quite dry and winds have a tremendous amount of strength. Quinoa, a local protein delicacy, is gown atop of this mountain. I loved all of the different colored quinoa agains the pale blue sky. 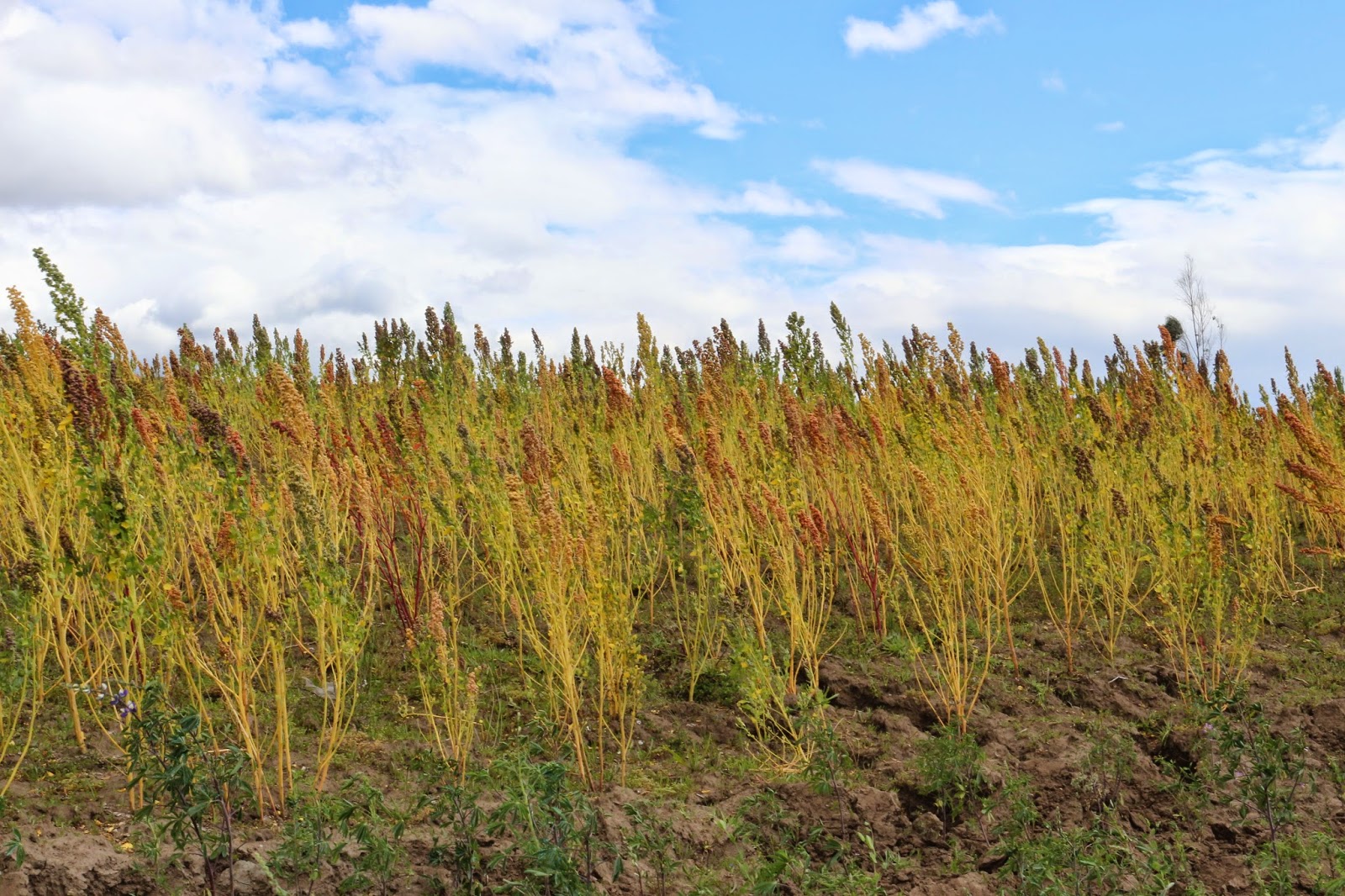 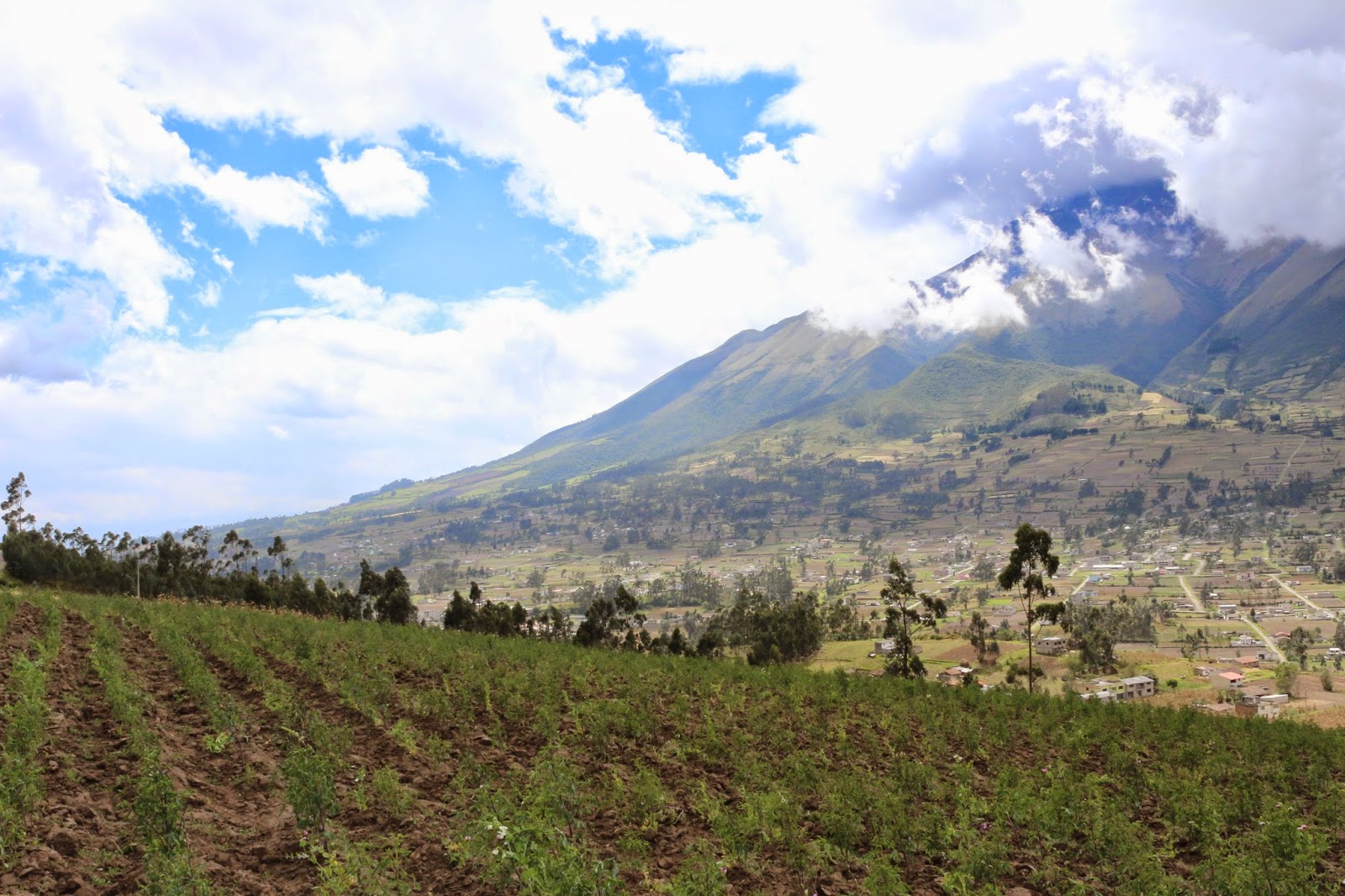 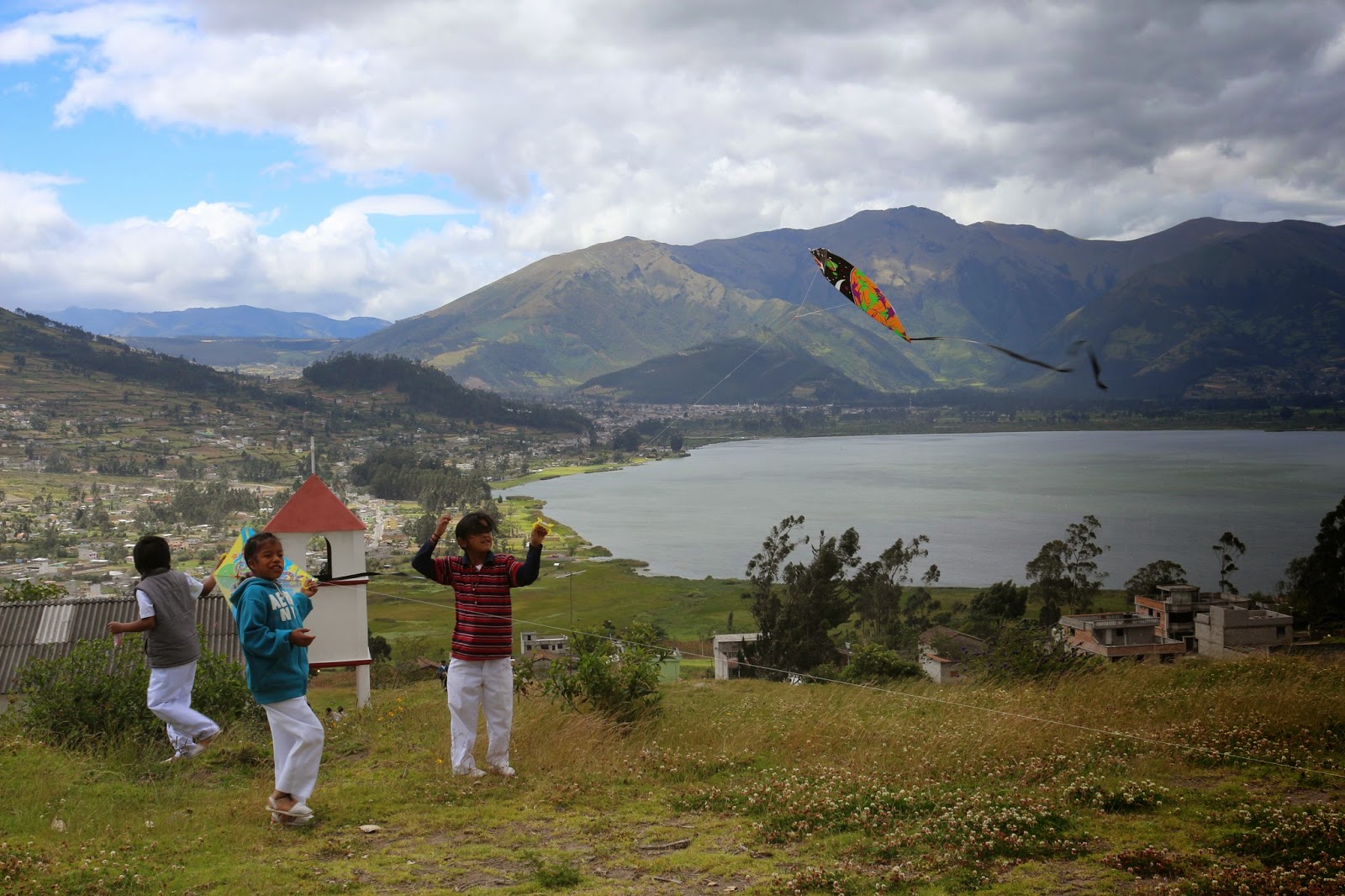 More and more Ecuadorian children came up the hill because they were so curious to see what was going on. So after we Americans were finished flying our kites, we gave them to the children of the village. They were so happy and grateful to receive this small and simple gift. I loved watching the children run with their kites in attempt to get them to take flight. 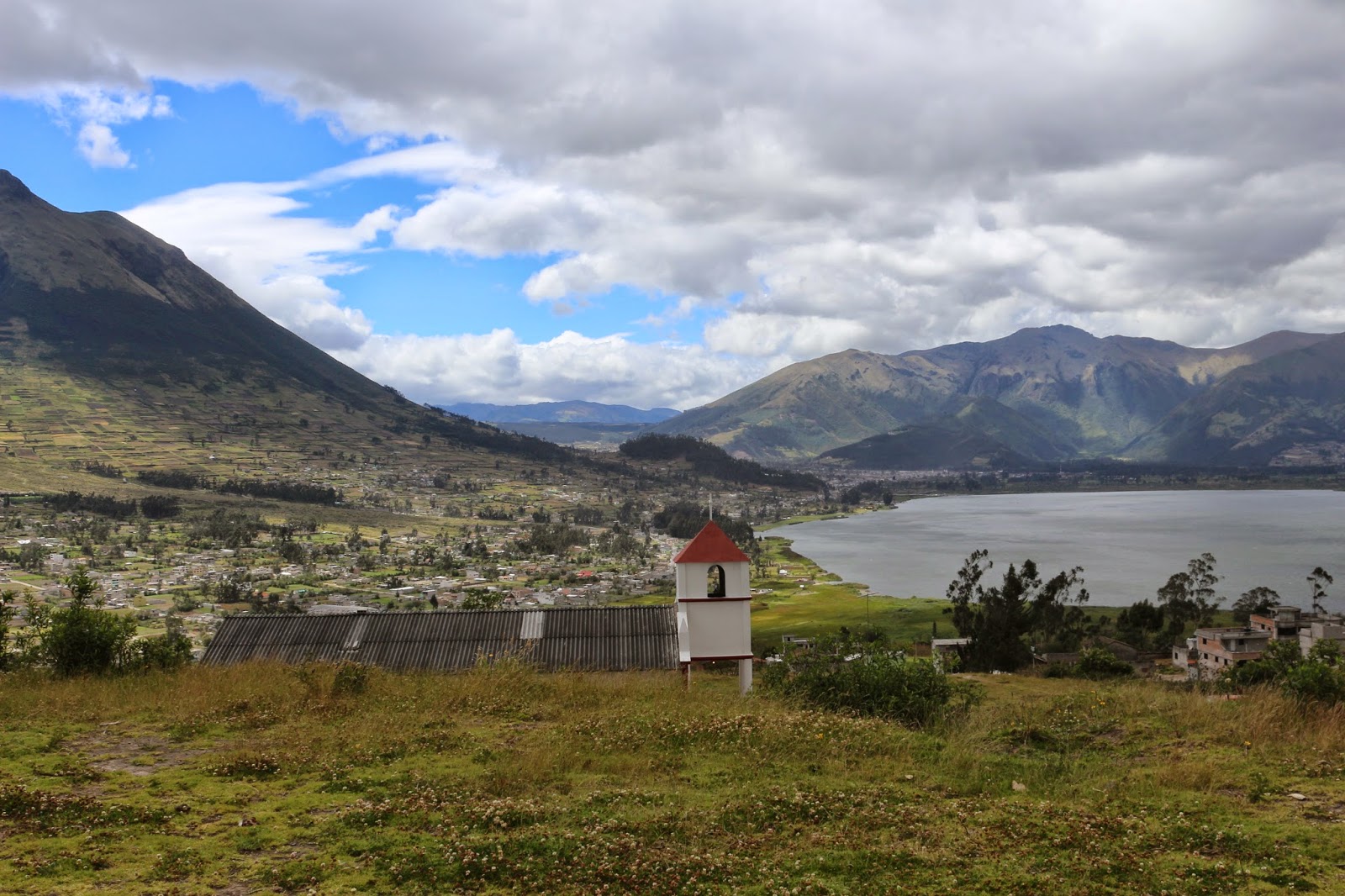 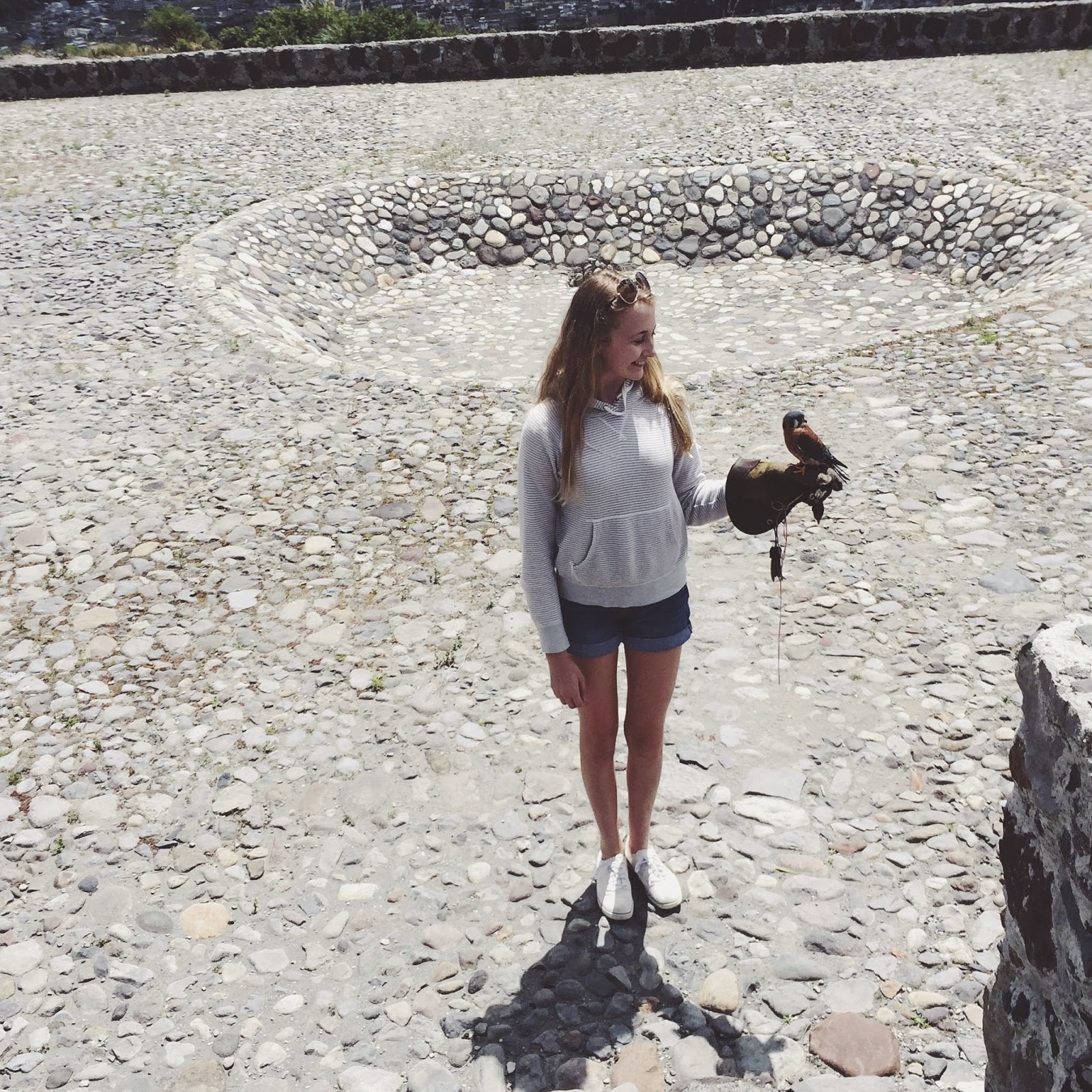 After frolicking around the side of a mountain for two hours, we went to a local bird refuge. Here, volunteers have taken in birds from the wild that have either been lost or injured and have trained them and given them a good home. There are two South American condors residing there! Condors are the largest birds in the world with a wing span around 10 feet! At the refuge, we even saw a flying demonstration of an owl, a bald eagle and many different types of birds. I even got to hold this super tiny, super adorable hawk. The smallest Ecuadorian bird of prey. The grounds at the refuge were so gorgeous, it was like a tropical escape int he center of the mountain range. 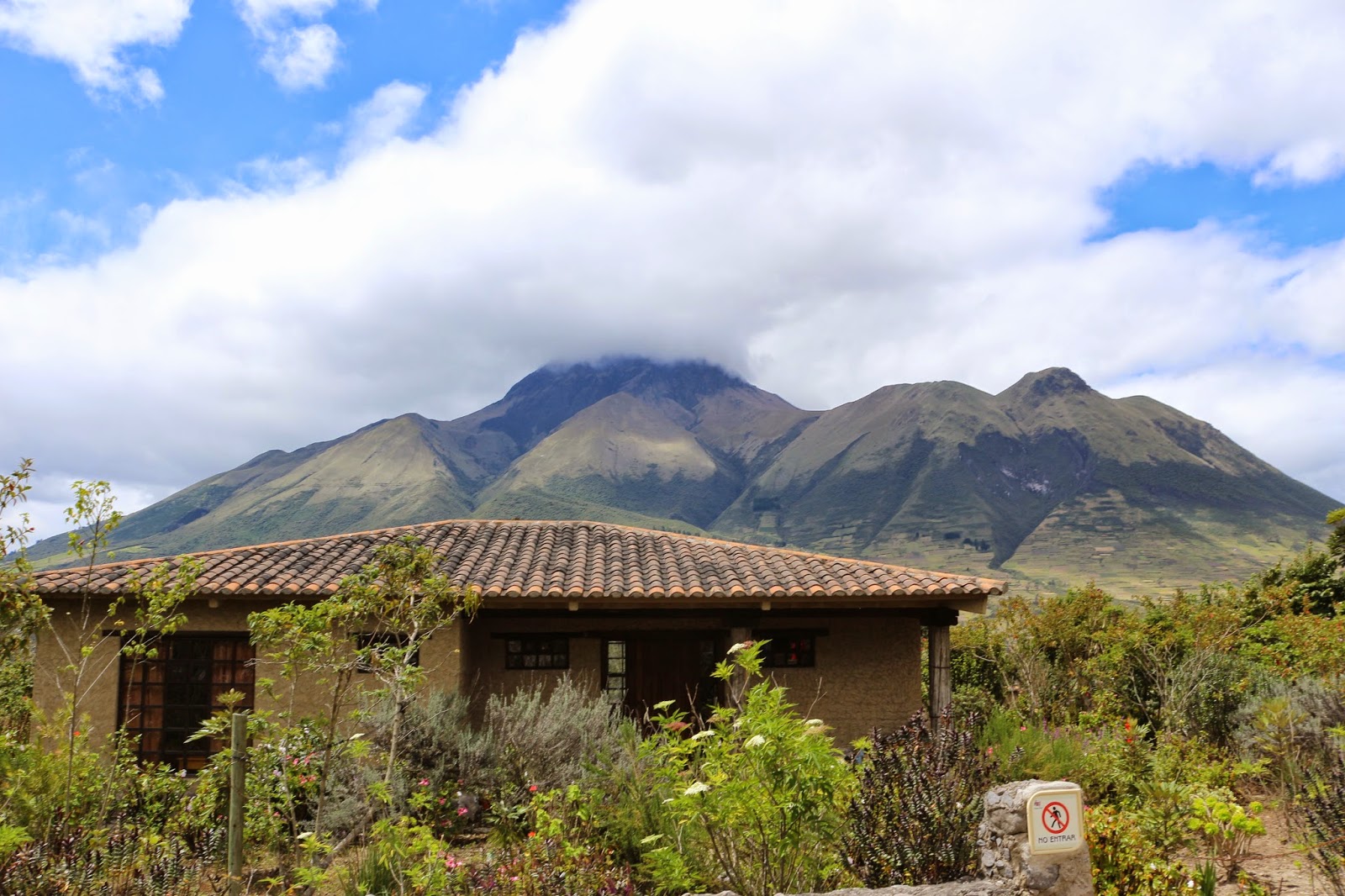 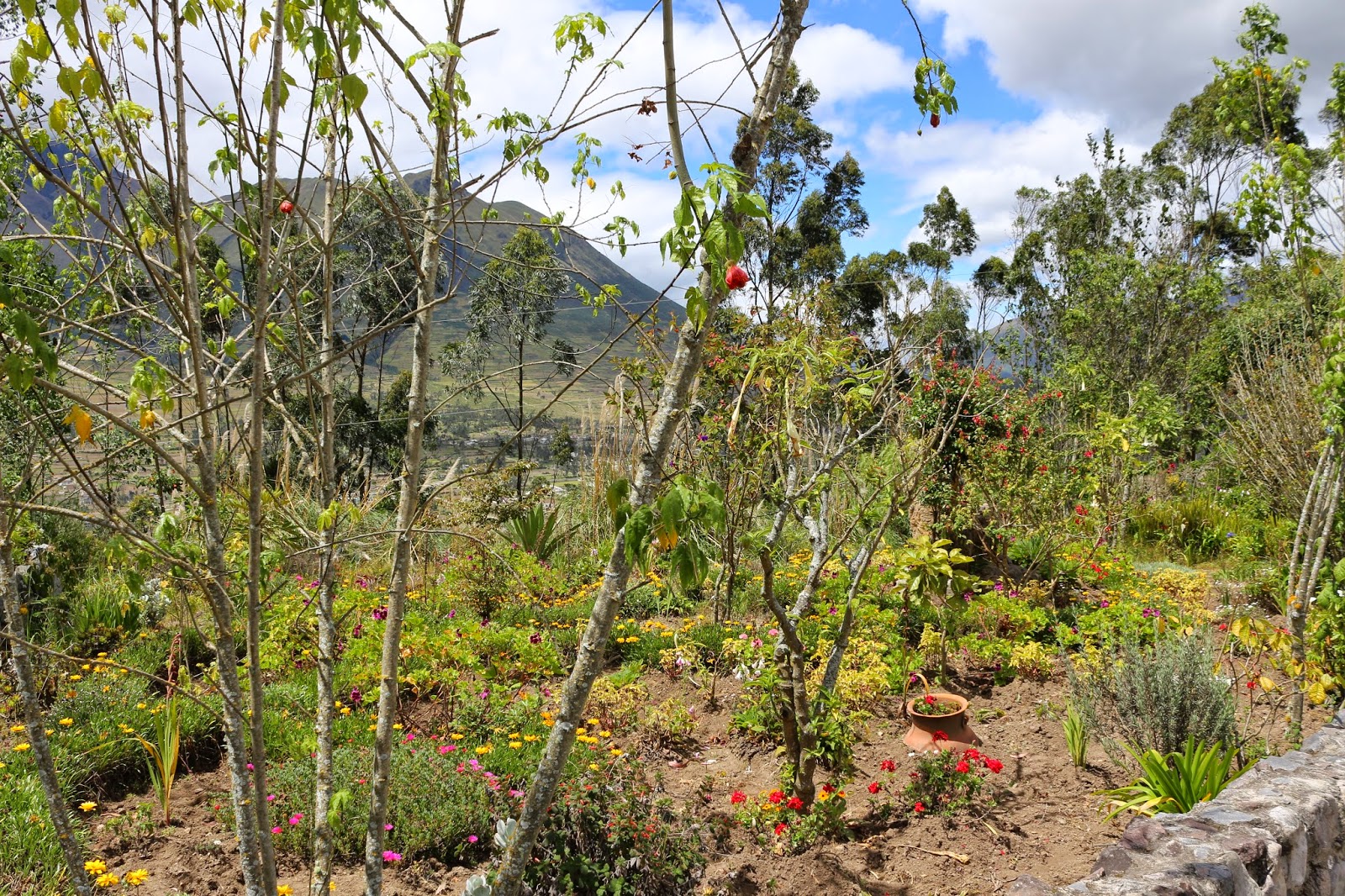 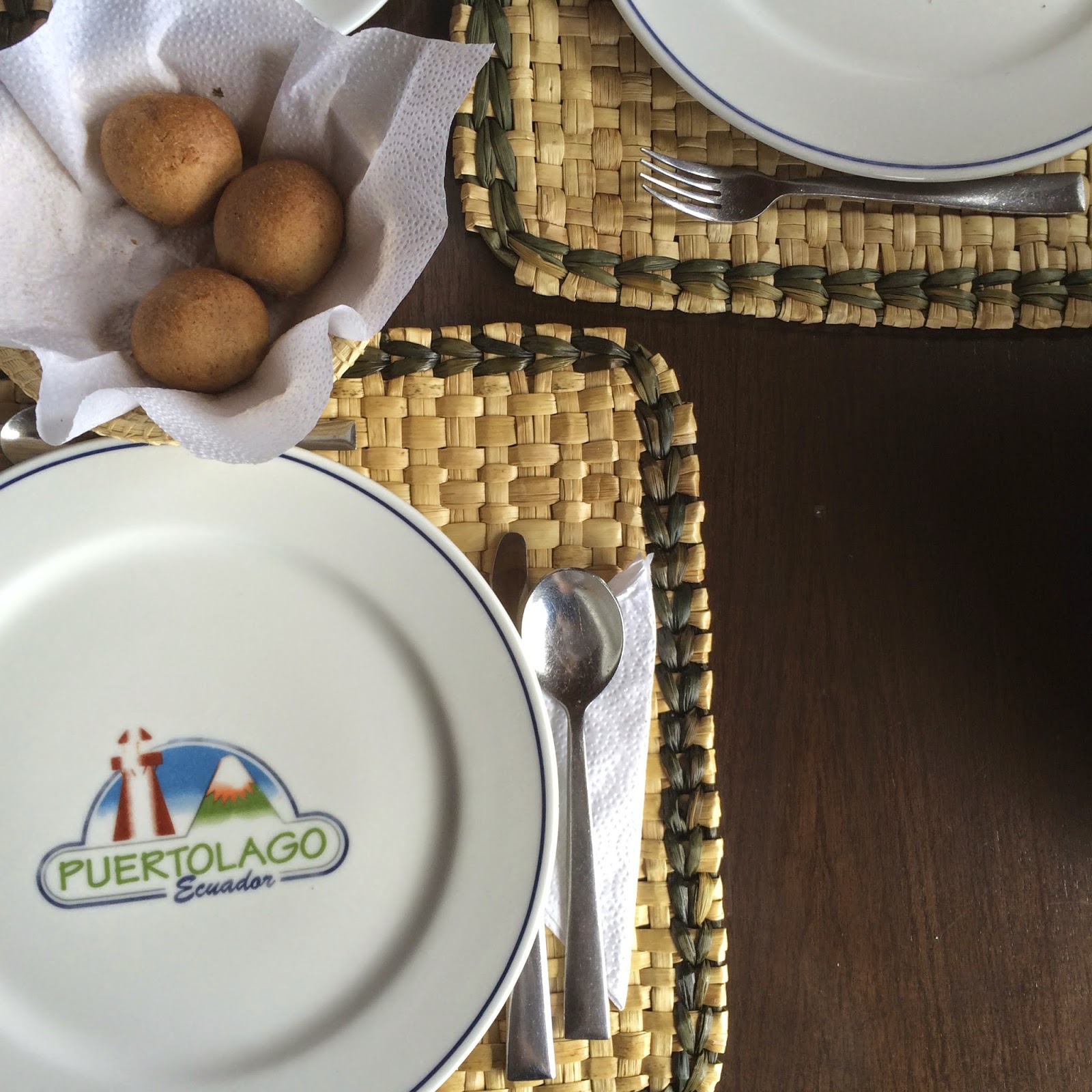 After a vigorous morning, lunch is necessary. On this day I sampled the fresh green salad, grilled chicken and raspberry and vanilla sorbet. Everything that I tasted was so delicious, you could tell that the salad was just picked that morning from the ground and the sorbet was just churned. The restaurant that we had lunch in was right on the water. No, in the picture below I am not standing on a dock, I am standing in the restaurant looking out the window. The restaurant was right on the water and if you looked down you could see the waves crashing into the side of the building. 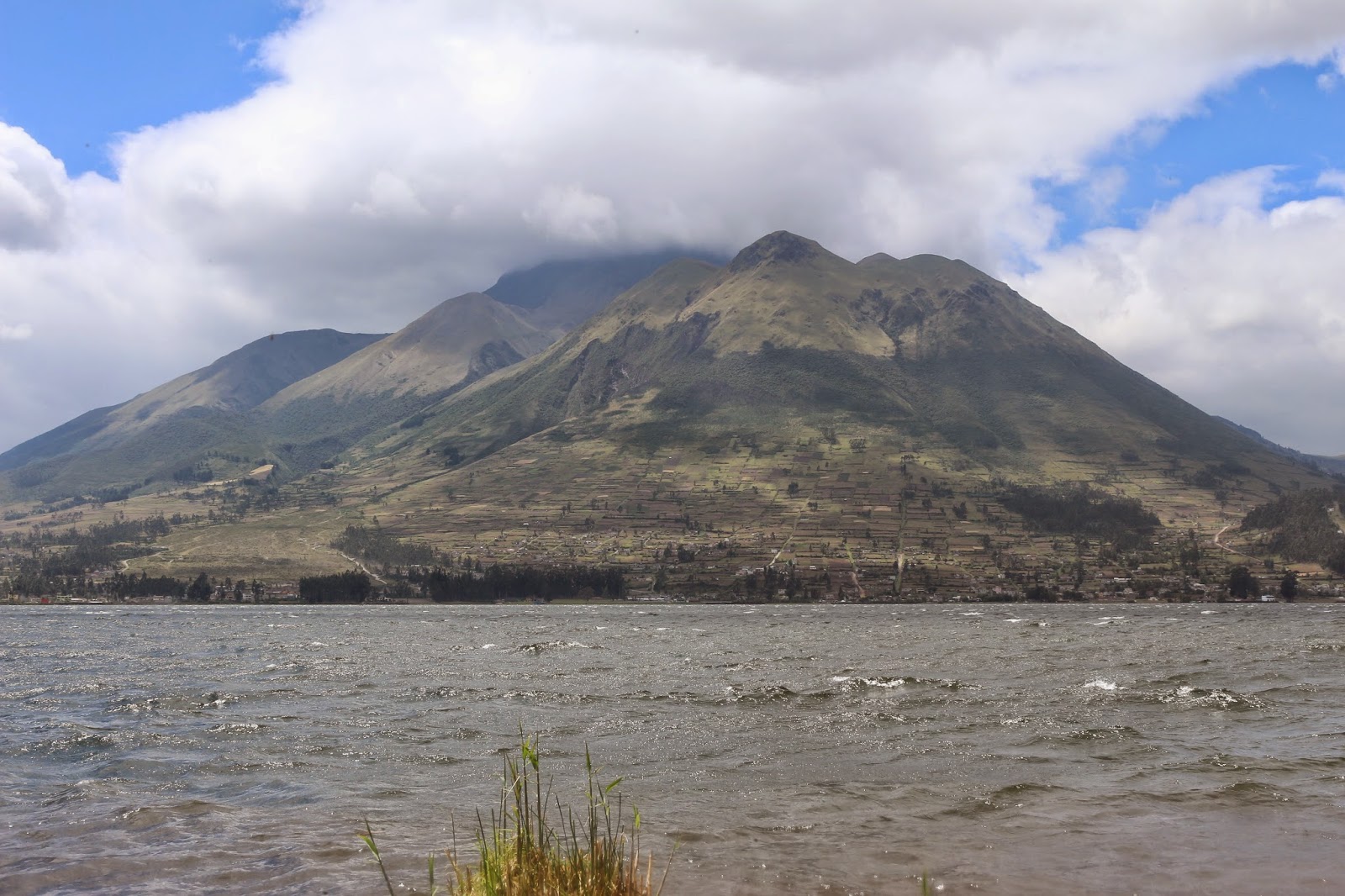 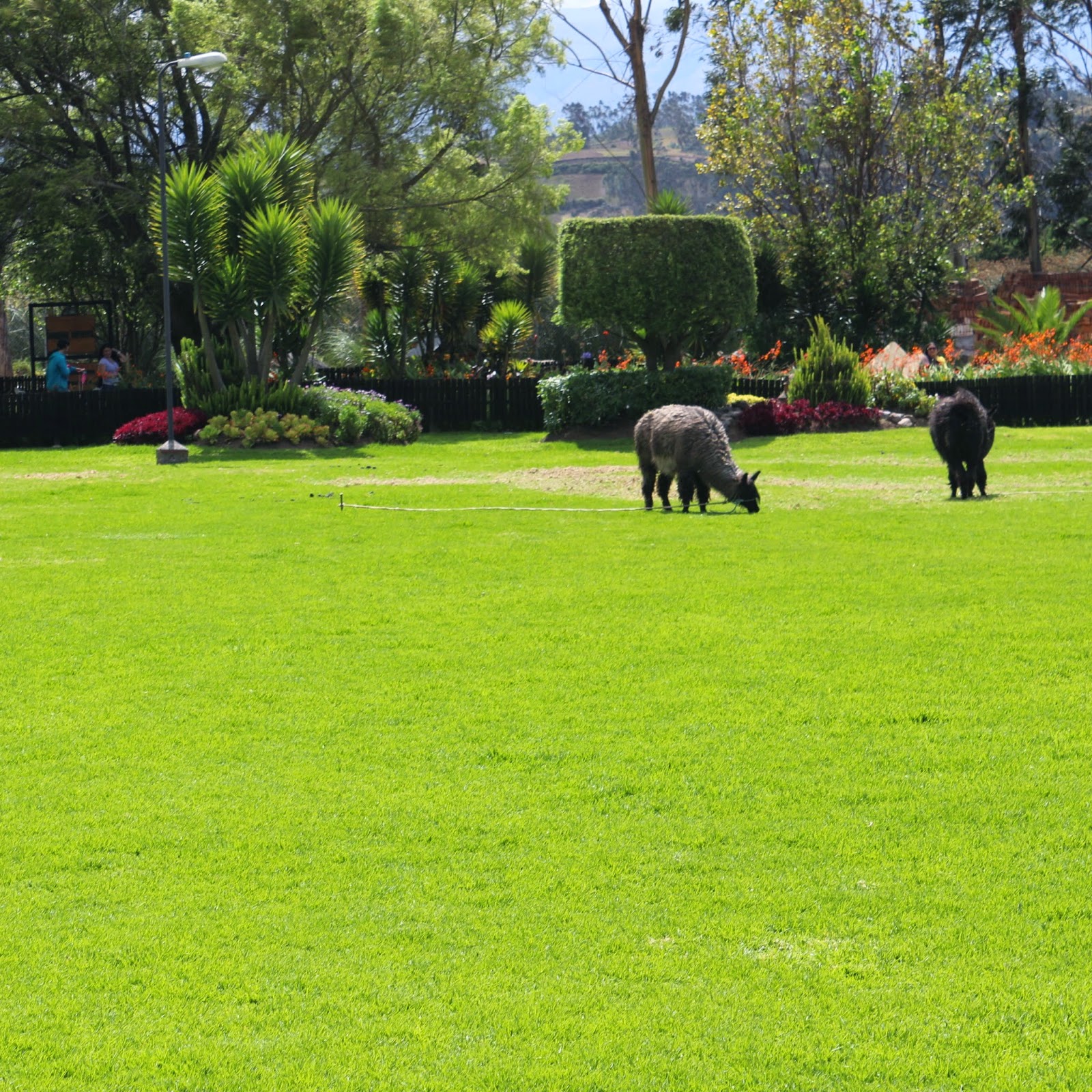 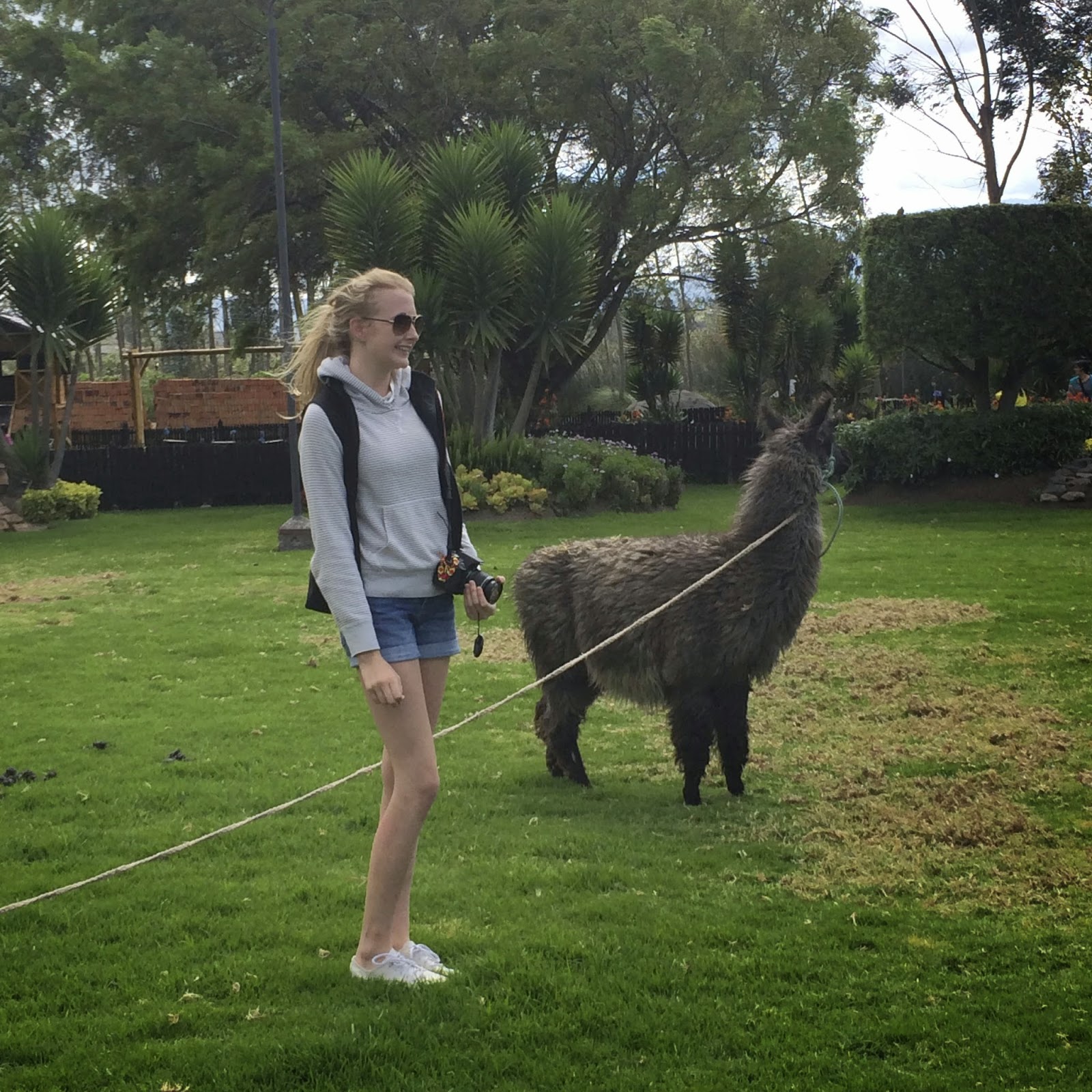 So after a long, long day of exploring the Ecuadorian highlands and market places, I took to a beautiful handmade hammock in the gardens of the hacienda to be rocked to sleep with the winds of the Andes mountains. Later that night we had a cookout complete with learning the methods of traditional Ecuadorain cuisine including fabulous empanadas and sorbet. 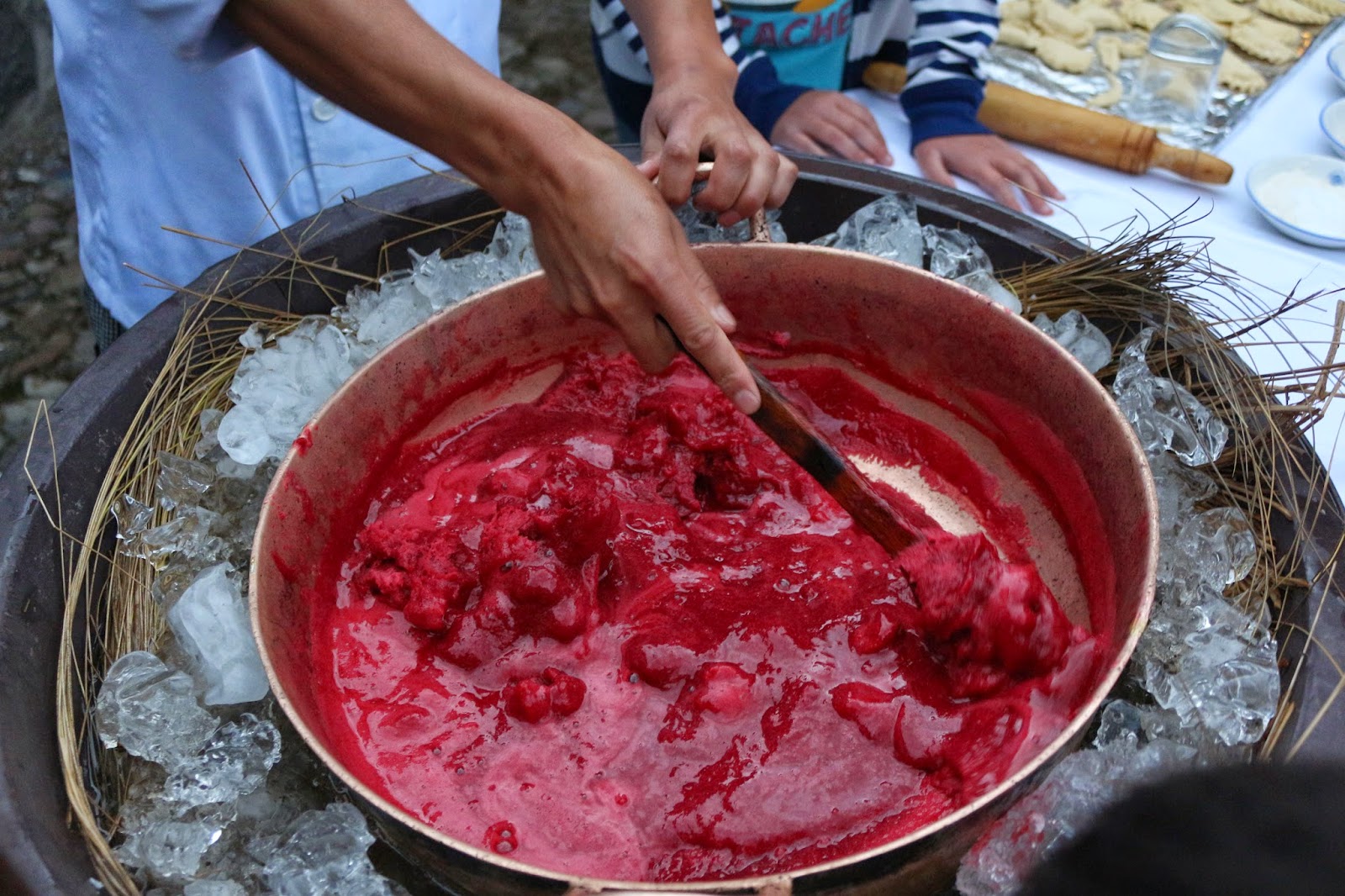 Well, you have now experienced Quito and the Ecuadorian highlands through my eyes. Come back next week for a peek at the Galapagos!